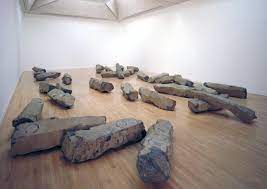 Joseph Beuys (1921–1986)—sculptor, painter, draughtsman, conceptual artist, teacher, theorist, philosopher, and political activist—ranks among the most radical and revolutionary artists of the 20th century. A charismatic, compelling, and controversial creator of objects and ideas, his imagination inspired and influenced the trajectory of thought and theory up to our time.

From his provocative “Actions” of the ’60s and ’70s, to his massive environmental project, 7000 Oaks, Beuys dedicated his life and work to the causes of ecological, economic, and political reform. His anti-authoritarian approach galvanized all strata of society.

Drawing upon the factual and imaginal realms of alchemy, anthroposophy, botany, mythology, and sociobiology, Beuys proved conclusively that the purpose and power of art extend into all areas of life. His environmental and social concerns are as relevant today as they were in his own lifetime.

Martino, an internationally recognized curator, critic, and scholar of 20th century art, who lived and worked in Vienna during the 1990s, was personally drawn into the controversy that raged through the European art world in the years following the death of Beuys.

Open a list of selected Athenaeum resources on Joseph Beuys, including books and artist’s books.