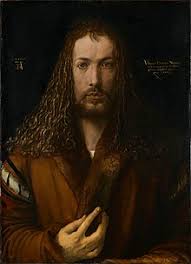 Series of Five Lectures |
Celebrating the Life of Albrecht Durer

Join Victoria Martino in celebrating the 550th birthday of one of art history's luminaries -- Albrecht Dürer. Marvel with her at this prolific polymath, whose works manifest the marriage of profound spirituality and perfect technique.

On February 9th, at 6:30 pm PT, Ms. Martino will give the fourth in a five-week online lecture series, exploring the life and work of Germany's greatest genius. The lectures will be live streamed via Zoom Webinar. Following each lecture, Ms. Martino will lead a lively and live discussion with Q&A.

Ticket holders will have 48-hour access to a recording of each lecture. This will enable art lovers from all over the world and in all time zones to join the experience.

Don't miss this unique opportunity to embark on an extraordinary journey of discovery. Ms. Martino can guarantee you, that you will experience more "Aha" moments in the course of this exploration, than you had imagined possible!

Tickets and more information are available on the Athenaeum's website here.

Dürer has been especially dear to Ms. Martino's heart since her youth. At the age of 16, Ms. Martino won a nationwide German competition (sponsored by the DAAD-DPAD). She was awarded a three-month sojourn in Nürnberg, where she lived with a local family and attended the Gymnasium (High School). The apartment in which she lived was a mere "stone's throw" from Dürer's house in the Altstadt. Every day, her walks took her past his house, through the cobblestone streets of the old walled city, which was his home. When she became acquainted with his art, she felt that it was already familiar, through her assimilation of his environment.

About the Albrecht Durer Lectures:

Such was Dürer’s renown, he was retained as the chief artist for the Holy Roman Emperor, Maximilian I. His greatest commission during this period was The Triumphal Arch, the largest woodcut ever produced, requiring 192 blocks. His many paintings from these years included several official portraits of the emperor, the last one completed shortly before Maximilian’s death.

In 1520, Dürer and his wife set out for a journey through the Netherlands. Traveling to major cities of the north, the universally revered artist established close friendships with the greatest painters of the region. After contracting a mysterious illness on his journey, his health declined. In his later years, Dürer focused mainly on theoretical writings and scientific illustrations, but some of his last paintings reveal a master at the peak of his genius. Dying at 56, he left a massive legacy of work.

The lectures will be livestreamed via Zoom Webinar. Following each lecture, ticketholders will have 48-hours access to a recording.